The Systems View of the World: A Holistic Vision of Our Time

Short, but deep read into systems theory. A philosophical approach to systems thinking and a must-read if you have a deeper need for understanding systems. 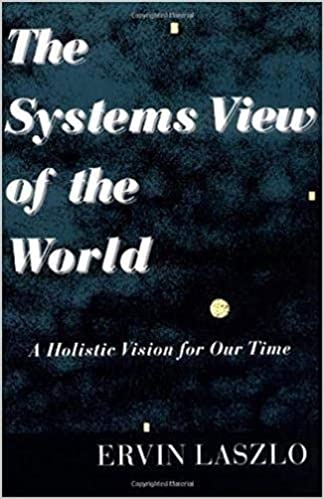 Why I Read It

I was in a Systems Engineering PhD program from 2010 to 2013 and through it all, I felt like I never received great exposure to systems theory. I did a bit of searching and found this book among other recommendations. The title was intriguing and seemed just right for learning about or developing a philosphy on systems.

Starts with a compare and contrast of worldviews between the atomistic and the systems worldview.

The specialists concentrate on detail and disregard the wider structure which gives it context. The systems scientists, on the other hand, concentrate on structure on all levels of magnitude and complexity, and fit detail into its general framework. They discern relationships and situations ...

What is a System?

Two points made here in this chapter.

First, in answering the question directly, Laszlo goes back to the atomistic and systemic contrast:

Whereas traditional reductionism sought to find the commonality underlying diversity in reference to a shared substance, such as material atoms, contemporary systems theory seeks to find common features in terms of shared aspects of organization.

That is, a system not only describes the things within it, but how those things are organized. This organization is the aspect that gives a system its functionality.

It is a way of organizing, or perhaps reorganizing, our knowledge in terms of systems, systemic properties, and inter-system relationships.

Note that natural systems does not mean systems found in nature, i.e., biological systems. Rather the term natural refers to the innateness or underlying character of the system. A natural system is a true system.

Proposition One: Natural Systems are Wholes with Irreducible Properties

The pile of sand and the group of people analogies. A pile of sand isn't a system because as you add grains or remove grains from it, it still remains a pile of sand. But a group of people (at team) can be considered a system because it has a structure and organization that changes as you add or remove people. Therefore, when describing a system, you can't describe each part and expect to be able to describe the system. This is what Laszlo means with irreducible properties.

Proposition Two: The Natural Systems Maintain Themselves in a Changing Environment

This is about equilibrium. Systems found in nature seek a natural balance (think predator/prey dynamics). Manmade systems seek that balance as well (think economic systems of supply/demand and how a market eventually finds an equilibrium price for a good).

Proposition Three: Natural Systems Create Themselves in Response to Self-Creativity in Other Systems

Self-creativity is better described as evolution. Natural systems respond to changing conditions and this response leads to changes in the structure of that system. Over time, and with enough changing conditions, the system is a completely different version of itself.

The word holoarchy is a fun notion. A holarchy is a heirarchy of holons. A holon is something that is bot a part (of a system) and a whole (a system of itself). This proposition is the idea of system-of-systems: That all systems are part of a larger, "super" system. You see this everywhere: in nature, at work in large organizations, in political systems, and for technical systems like national infrastructure.

A Systems View of Ourselves

Laszlow applies his systems thinking to philosphical topics such as our origins, consciousness, culture, and morals and ethics.

Get the Book or Pass?

Unless you are like me and have a need for a philosophy on systems, and in particular general systems (after all Iwas teaching), this book is probably a safe pass. Depending on your industry, there are plenty of other books out there that will get you a more practical perspective on systems thinking.

Here are a few recommendations:

Or find the article useful?

You should sign up for my weekly newsletter, Three Things for Thursday. I write about productivity, lean six sigma, the latest, most interesting books that I'm reading, and any cool internet finds I've come across during the week.

It's one email delivered to your inbox just before the weekend with my latest ideas on productivity, efficiency, and personal effectiveness. Sign up below and enjoy!